Based on our centre’s Guided Innovation Project on Singapore’s Little Treasures @ The Peranakan Museum, we involved our ‘little chefs’ across all the levels in exploring the wonderful world of Peranakan snacks.

Children were given opportunities to:

Working together in pairs or small groups presents children with opportunities to build positive relationships and encourages them to learn socially acceptable behaviours, such as sharing and taking turns. 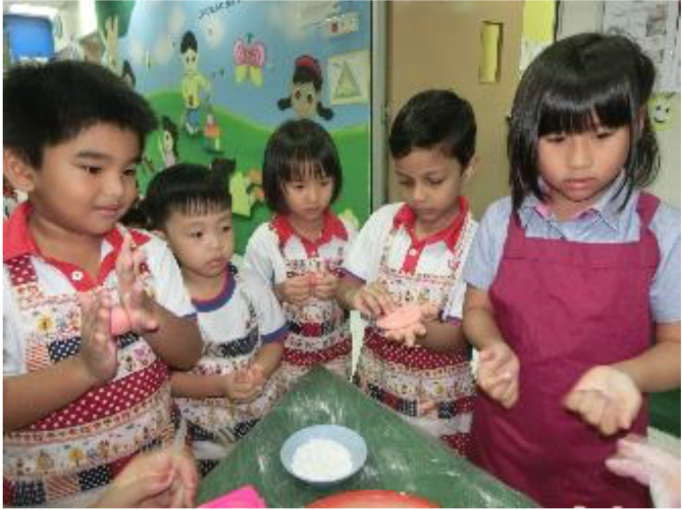 After a demonstration on how to make “Ang Ku Kueh”, the children worked in small groups to flatten the dough, wrap the dough around the filling, and roll them into balls before placing them into the moulds.

The teachers placed the steamed “Ang Ku Kueh” next to some that had not been steamed, for comparison. The children observed the differences between the cooked and uncooked “Ang Ku Kueh” in terms of their smell, texture and colour.

After all that mashing, pouring, mixing, moulding and steaming, the children looked forward to savouring the delicious “Ang Ku Kueh”. Not only did the children learn a new recipe, they also picked up skills across various learning areas.
Contributed by PCF Sparkletots Preschool @ Whampoa, Block 85 (KN)
Sticker